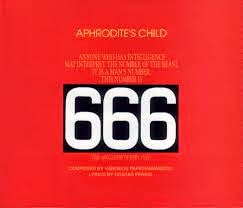 Just heard the news that Demis Roussos died yesterday. Not that I was a huge fan of him but he's a one I should write some words about him. He was known in Germany as a one that sung the so called 'Schlager' in the 70s. But back in his origin he used to sing in a progressive rock band - 'Aphrodite's Child' which he founded together with Vangelis. What will be his legacy is the album 666 in which Aphrodite's Child made an adaption of Biblical passages combined with experimental sounds. Their biggest hit was the added video from 'The Four Horsemen'.


And this song is really experimental song on which a female orgasm is simulated by the Greek actress Irene Papas, who repeated the words 'I was, I am, I am to come' over a sparse percussion track.