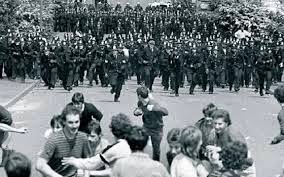 As in most other European countries this day is a public holiday here in Germany as well since the Nazi regime installed it as the 'Day of the National Workers'. A lot of years gone by since I joined the local socialists to celebrate this day. There are many reasons why I stopped. One of them is that I don't believe in their words any more. It doesn't mean that I declaim the unions justified aims because I was raised with them. Anyway, I finished 'GB 84', John Pearce book about one year in Great Britain. He described in a novel week by week the strike of the miners back then from some different points / characters. It's a pity to read those stories of friendship turned into hate when your neighbor joins the scabs, family broke away because they had no money at all and kids died while they were grabbing coals to heat the house. And I still respect the miners staying close together following Arthur Scargill and blast by the Iron Lady.

Interesting to read your comments on what were troubled times Walter