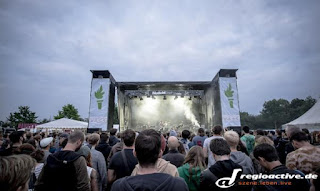 After a great first day on this festival me and my youngest brother took a slow start into the next day. Sitting on the breakfast table we discussed about going to a little coffee shop to Heidelberg. It is not the coffee shop you might know from the Netherlands. It's more about a coffee shop you can get a high class coffee. As I am used to drink a lot of coffee throughout the day I couldn't imagine how a freshly brewed coffee with perfected roasted beans could smell. I was surprised how this coffee worked in my body. In the beginning I recognized a warm and wealthy feeling in my breast I've never felt before. Anyway, the main discussion to me an my brother how to spent the afternoon. He wanted to watch to concerts in the early afternoon and I was looking out for a pub where I could watch the conference of the last day in the German Bundesliga. At least I found pub where I could watch the last games. And finally my team successful and will play in the next season in the first league.

So let's get back to the festival. The first band I saw when I came back from watching football was The Soft Moon. It's a post-punk band from Oakland, USA. Deeply based in the sound of Joy Division they played a memorable gig. A very deep bass with a leading new wave guitar added with a fantastic light show they threw me back 30 years when this sound ruled my life. I was hardly impressed how an American band could play the sound of dark Britain in these days. Worth to check out more of them.


Next one on the stage was the Canadian indie-folk band The Rural Albert Advantage. They bands main ingredients is the voice and acoustic guitar of Nils Edenloff. They do very good songs, most of them in an up-tempo style and none of them boring. They had no great appearance on stage but their songs lasts in most of minds of the audience. Really good songs for a relaxed afternoons.


After the show we took a little rest to listen to a singer-songwriter and acoustic guitarist. For half an hour it was relaxed and peaceful to listen to him an his playing. Just to sit and listen was a very good experience until the next band shows up.

Next one on the list was a local band from Landau, Germany. To describe their music is not easy. Based in classic rock they integrate Afro-Beat, world music and classical song writing into their sound. I would describe their music like a wide-screen sound. Like some Scottish musicians they are able to make songs that don't hit you the first time but when you listen to them the second time you'll find out some details you've don't recognized before. Maybe a band with a brighter future.

The next two band I didn't listen closely. I've to admit that I was a little tired and took myself a rest away from the stages. Nevertheless you could get away from the music. Listening to Archieve wasn't too bad but no highlight because they just played perfect but without any emotions. In fact that they made some good songs they should be able to play them live with more feelings in the songs. So I went to the next stage to see rest of the gig from Foxygen. Not that they were much better but they tried to make a great show with an orchestral sound, an Mick-Jagger like acting singer and three dancing singers. Based on pure funk and soul they made an eye-catching show (more than you could hear on vinyl or see on videos). Without any more ambitions than having fun they served us very well.

Now it was late at night and the main act is coming to start the concert. Mogwai was the main reason why I decided to get myself a ticket for this festival. I follow this band for a long time and I think that they are maybe the best band that Scotland gave to us today. I love them because they don't make songs - they are more and more into creating a very own sound. I was not sure if they are possible to do this live but they told me that their songs live are much more better than on records. Finally I have to admit that this was one of the best concerts I've ever been. Standing in front of the stage and watching the band play you've got hit with a massive bass directly into your stomach. And there is nothing more than some drums in the background. And suddenly the guitars take over the control. Free jamming with feedback galore. At least the sound hits your body and you feel pain listening to the frantic feedbacks. But not only me was happy about this concert. For me it seems like Tortoise played faster and without their general plan and like Jesus and the Mary Jane reduced to the basics.

What more could we get from this day after watching one of the best band around? Nothing. We were full of adrenaline and waited for the last band to show up. Von Spar - a band from Cologne finished the day with an extraordinary mixture of dance-floor mixed up electro-punk with ingredients of early 80s indie-pop. But always strictly with a very good flow. All in all a band you should listen to in the very late evening/early morning and you won't fail.

You can't beat a good coffee Walter, at any hour of the day! Sounds like you had a great time at the festival, thanks for the detailed reviews - it was very varied line-up. It's good that you saw Soak, something special there.