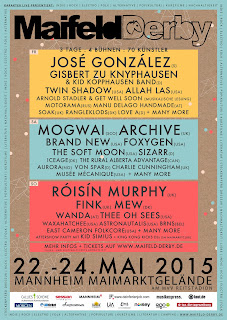 Last weekend I went for a festival in Mannheim. The idea grown while my youngest brother visited me early this year. He told me about it when he joined in last year. So I watched out for the set-list for this year. After all I was astonished how many bands will playing and how different the program is. It's located on a fair ground close to a local place for show jumping and dressage. They built up a bit top, an open air stage, a small top and a very small stage for acoustic performances. So you were free to join the concerts you would like. I was astonished how exactly the concert started. No one was later than announced. So I was commuting between the very different occasions and had me a very fine time. I would like to tell something about the acts I've been seeing and give some comments about the show they did.

I arrived late at Friday because there was a lot of traffic on the highway with several jams on the way exactly for the show of Ghostpoet. He made a fine show, presenting his latest record. He played a well concert but in my opinion I missed the soul in his music. It was just 1:1 to his record. Not too bad but I expected something more in his appearance. After all I've to say that it wasn't necessary to watch him on a live performance. If you've got his record it will be okay.


The next artist we saw was Motorama, a Russian band playing pure Rock and Roll. We don't have to discuss if it is high class or not - these guys were here to play, having fund and the audience too. They are one of these bands you could watch and listen to without any prejudices - just having fun listening to them. Based on the Indie sound of the early 80s they do a very fine interpretation of this sound nowadays. I enjoyed this concert much. Give them a listen and I am sure you will agree to me.

Standing around for hours I decided to sit down and listen to some acoustic performance. So I went to see SOAK. She's an 18 year old female singer/songwriter playing on acoustic and electric guitar. I didn't expected anything - just a peaceful rest between the main acts. What I got was a very intense appearance from her. Playing acoustic guitar to her very personal songs was fantastic. But when she plugged in her electric guitar it sounds like a femanine Billy Bragg. And her voice is so beautiful and she's able to sing in many octaves. She might be young but her songs and her performance are far over the average.


After this show I moved to next act.It was the Allah-Las, a band from the USA. Their record a few years ago impressed me much so I was curious if they can do this on stage. And I have to say - yes they can. It was a very own and special mixture of late beat sound and early psychedelia combined with extraordinary vocal harmonies. And yes, I have to admit that this sound is not stuck in the past. It is very new and fresh. It was one hour of pure fun listening to them. And the young kids liked this kind of music - even if they don't know the originals. Still a best kept secret - what a bummer.

The main act this evening was José González. He is Swedish and the son of Argentine immigrants. First he played bass in a punk band when he was very young to change to acoustic guitar when he was getting older. It is a perfect sound  and the band played exactly. No tone was wrong and the songs were similar to his records. All in all a good and great concert but I missed the special kick. He and his band played perfect - just without soul and individuality I expect on a live concert.


We finished the first day with the last concert in the small tent. This location is scheduled for unknown bands and newcomer. Love A is a German post punk band from Wuppertal. I've never heard of them before but they persuaded me with their appearance. A good bass, sharp guitars and a singer that fits to the songs. And lyrics that are new and substantial.