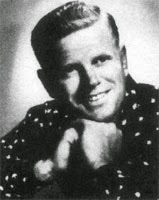 Bear Family Records is a German based independent record label existing for 40 years right now. They released a lot of original recordings for the second time. But most important was their compilations of different genres during the last years. A few month ago they released a compilation of early Rock 'n' Roll and Rockabilly recordings. Most of the artists I've never heard before but there a lot of nuggets in it. This one is from Al Coker and the Coker Family, another country/rockabilly artist who released some song back in the mid 1950s. Just based on a country ground with a little touch of guitar sound Johnny Cash did it a few years later.