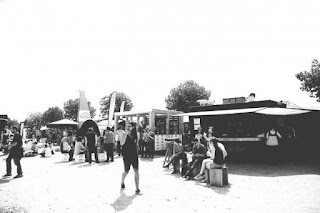 It was years ago since I joined to a festival for several days. It was the last day and I felt pain in my feet. I wasn't used to stand for hours to watch the shows they offered me but at least I figured out the gigs I want to watch.  The first band we watched was Waxahatchee, a singer-songwriter project from Katie Crushfield. Deeply based in the tradition of acoustic songwriters raised up with independent music she makes a very unique sound that fits the souls of the pre-Seattle sound. Very intensive and worth to listen to their record.


The next band that showed up in the tent was Mew from Denmark. I knew them from some different records they released during the last years.Their records are not bad, but I wanted to see them live and how their songs work live. I have to admit, that they played a gig that was perfect. But for me it was too perfect. They've got no soul in their song. So it was just another professional performance that was nice to watch but it wouldn't last. Sorry - but they missed a chance to get me on their side.


The next act I watched on the open air stage was Wanda, an Austrian band which came famous at the end of the last year. Seems like they found the sound and lyrics for nowadays young hipsters. They had a little hit at the end of last year with Bologna, a song that puts love in the center of their song.


If somebody asks where you go, say to Bologna!
If somebody s for which you stand, say for Amore to Amore!

It might be a statement for them and I think it's not the worthed one. Their show wasn't too bad, but it worked with the emotions and the hipster status they had. Nice to see and if you missed it it wasn't worth to complain about.


The last concert on this festival was by Fink. I followed this DJ for many years and  was curious how the present their songs. Everything I expected was more than fulfilled. He was able to create a sound that is very special and very own. Mostly starting slowly with his songs he attempts to early 80s sounds and lead this into nowadays sounds. Me was very impressed how he started a simple blues schema and turned into a heavy improvised new wave/dancefloor sound. Very special, very new and very recommendable to you all.

OK Walter, I'm now very jealous indeed. You've posted three days of some very good music at this festival. AND WHAT DO WE GET HERE? SUPERTRAMP for crying out loud!

Oh my god! Wish some really good bands will show up to your place soon, George

Waxahatchee is interesting is she not Walter
A little known fact - George is actually a secret Supertramp fan!