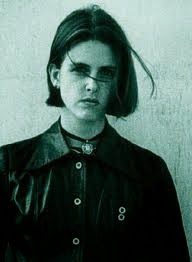 These days a song by Lone Justice shuffled up on my mobil phone on the way to work. Listening to their songs after a longer time made me smile again. Later this day I looked in my records for more songs by Maria McKee and found her album from 1983 'You Gotta Sin To Get Saved' again. Lone Justice was a band that was maybe the missing link between country and punk. Played with a lot of verve, enthusiasm and fun. Some of their songs are classics in this genre and absolutely timeless. With her second album she impressed me much. It was the time you could stand to country and traditional country at all. The years before the rock and new wave inspired ears wouldn't give a listen to this kind of music. Maria McKee transported the best of country (songs about the classic themes like loneliness, separation and lost chances mostly sung with a very somber tone) into nowadays music. I like her voice much because I feel that she stands behind every word she sings and she sings the songs with a lot of emotions. Maybe it's sentimental - but sometimes it should be this way.

She has a fantastic voice. Fine selections Walter.