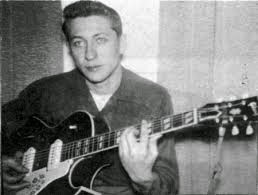 Scotty Moore was known as the leading guitarist in the early backing band of Elvis Presley. He played on many songs his unique guitar. After leaving Elvis he came along with a new band and this instrumental. Way back many well known guitar players like Keith Richards and Eric Clapton named him as a main influence of playing guitar. If nothing last from him - his thump-picking playing will.