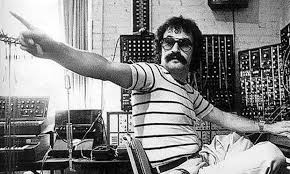 Back from a fantastic gathering in Glasgow with all the guys and done again on duty. We had a very good time sitting together laughing and drinking and suddenly we had the idea to post about Coldplay today. Not that we will call us fans but there will be a new ICA over at JC's place today. For that reason we planned to post Coldplay as well. Midnight is an example of Coldplay's sound and shows Chris Martin and his pathetic voice at it's best. This song stands for what the band is: suffering in their emotional sadness. Not that I don't like this sometimes but most of the time I combine that predictive attitude with Bono. Anyway, I choose this song because this remix is made by probably the godfather of disco-music. Giorgio Moroder developed a very unique sound in the early 80's - far away from what I usually listened these days. Moroder made this song his own and turned him into a house-inspired song worth to be listened.

"Chris Martin and his pathetic voice..." A truer description has never been made. For me, the Moroder remix is the only thing that makes this song listenable.

The stories are beginning to trickle out. It sounds like great fun was had by all over the weekend, though I am somewhat surprised that you used some of your precious time together discussing Coldplay! 'Chris Martin and His Pathetic Voice at It's Best' should be the title of a Coldplay compilation Walter - brilliant!

Even better than their song that sampled "someone named Kraftwerk." Nicely done. Great weekend, my friend. We will meet again. Be well.

My guess is that lots and lots of booze was consumed. That can be the only explanation of all this Coldplay malarkey...

Great post Walter. Nailed it. Yes Robster, it was.

Great stuff Walter. A very clever way to be part of Coldplay Monday.

It was a real pleasure to meet and spend time with you in Glasgow. Already looking forward to the next time.

Wow. I remember Moroder playing [and talking about it on his vocoder] that when I saw him DJ at Moogfest '14. It was a pre-release exclusive then, but I don't remember it at all. I guess it did get released.