At The Pool Hall Last Night 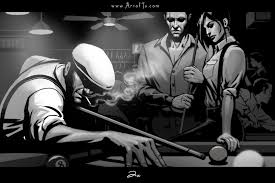 Yesterday my former wife arrived with her husband for a couple of weeks at my place. As used to it we went out for a drink at our local pub. I know that he's very interesting in playing pool with me. I used to play pool from my youngest days but sadly had no chance to play very often during the last years. Sitting in the pub we met a few friends who also wanted to play and we made a small competition out of it. Had as a real good time there enjoying ourself like young kids. So I think it is time to play the best song about pool table ever.

And another one from a band that is probably forgotten. Sean Tyla and his Tyla Gang were pioneers of pub rock and this is a footage from a live concert in the late 70's.

From when Rod was good!