Bury Me Deep In Love 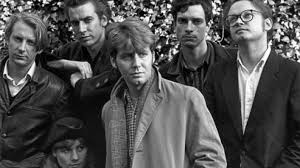 Back in the mid 80's a band from Australia was the one a lot of people could agree to. Some people from down under called them a post-punk band but for me they were always a very talented singer-songwriter band with roots in new wave and pop. The Triffids were always a band that took me back to the old days where songs were created and searched for the perfect pop song. I played their records recently and have to admit that their bleak and melancholic folk didn't lost it's attraction during the years.

One of my very favourite bands ever. It breaks my heart to think too long about them. RIP David McComb.

Well done, Walter. Only one band from Australia better. That's a gimme.

My friend Mike, who has the blog 'Manic Pop Thrills' is a huge fan of The Triffids.

He has featured them on many occasions, with some very fine and enjoyable writing.