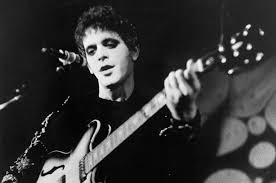 1974 Lou Reed released Rock 'n' Roll Animal one of the first albums I bought from my own money. It was before I realized that most of the songs originally were by the Velvet Underground. I was fascinated by Lou Reed's voice and the heavy sound of his band. Compared to the originals he destroys the beauty of his greatest songs by turning them into a cliché of heavy metal mutations. After a few albums by Reed which were always over-ambitious and like suits which were a few numbers too big he finally returned again as the old, animal and degenerated Velvet Underground singer as a real Rock 'n' Roll animal, unpredictable and wild.

Wow, it's been many years since I heard this version Walter - thanks for reacquainting me with it this morning.