Songs For The Eternity 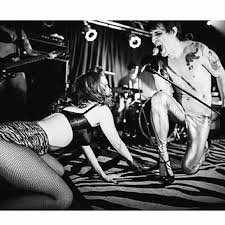 I started this series weeks ago when I was transferred songs from my computer to my external hard-drive and I was surprised how much songs I have and how many will not transferred because they were songs I listen often from time to time. These songs doesn't belong to any genre and they accompanied me during the last decades.

There were many songs by The Cramps I could choose for this series and it is hard to select only one (even harder to make an ICA). But I think Human Fly is one of those songs that will stay when everything is gone. Back in 1979 in my hometown the first punks appeared and at the same time a small rockabilly scene established as well. There was no dispute between both groups because they were both outside the mainstream. I knew a few guys in both scenes and they met in a small cellar playing some music where I hang around in these days. Some day a greaser came and introduced us to a new imported 12-inch single he got. It was The Cramp's Gravest Hits and listening the first time to these songs I was infected to them. Only a small drum-kit making the rhythm, two twaning guitars making the sound without a bass and then Lux Interior singing in a way I never heard before. I also like the short and trashy lyrics of their songs and I was lucky enough to see them once live on their Flaming Job tour.

I found this rare footage while researching for this post. It's 16mm film by Alex de Laszlo also for the benefit for Lux Interior.

This is such a brilliant song!!