Andrew Eldritch Is Moving Back To Leeds 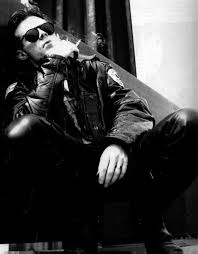 It was a long time ago since I heard something by The Mountain Coats, that Californian new-folk band but I remember that it made fun listening to them. The more I was surprised that they are still a band and able to release a new album next month. I was more confused about the title of the song Andrew Eldritch Is Moving Back To Leeds and thought it will be worth to listen to the lyrics closely. Sounding like a singer-songwriter doing country, this song is a simple, smooth and somewhat modernized MG anthem, which just happens to be about Sister Of Mercy's erstwhile leader.


There's indifference on the wind


To remember how it was
When they all thought they'd move away
And ride in Lotus 7s
Through the London streets one day.

Nobody ever gets away
Even the best of us come back some day
To the unmarked rooms, where the dry dust breeds
Andrew Eldritch is moving back to Leeds


No-one anticipates the rush
The breezy feeling of the faceless crush
At the end of things, where the salvage bleeds
Andrew Eldritch is moving back to Leeds


And as a bonus one of the Sister's classic songs:

Nice tune, Walter. I've not played any of my Mountain Goats albums for a long long time.

Like you Walter, I thought this band had called it a day a long time ago.

This was good to hear. Thank you so much.