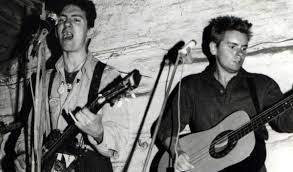 Following yesterday's post I remembered another band that impressed me much in the early 80's. Nyah Fearties were a Scottish music band from East Ayrshire who created a unique brand of anarchic folk music in the early 80's. Wikipedia tells:

Combining the rich traditional music and storytelling culture of its native Ayrshire, with a jarring punk ethos, madcap humour and improvised acoustic instrumentation (though usually amplified), the band made a significant contribution to the British folk-punk scene of the 1980s and 1990s.

It often tested live audiences with a feedback-laced aural assault, more akin to experimental rock groups like Velvet Underground or The Jesus and Mary Chain, than an acoustic folk act. In addition, Nyah Fearties were known for utilising all manner of improvised and imaginative musical paraphernalia.

They were not another folk-punk band like The Pogues or The Men They Couldn't Hang. Their music was more raw and grounded than the other ones I named. A perfect mixture of classic folk ingredients added with heavy influences of northern industrial sound. I once saw them live in a very small venue close to my place and it was one of those concerts you went to expecting nothing and you get recompensed with an unforgettable gig.

As far as I know Nyah Fearties means not afraid of anything - if I am wrong please correct me.

You are spot on with the explanation of the bsnd's name Walter.
Must be all these visits to Scotland!