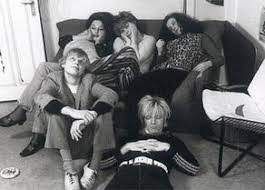 For the rest of the week our worker's council sent me for a further training in labour law and communication and collaboration to Hamburg. So I had the idea to create some posts about the so called Hamburg school. It is a synonym for musical movement started at the end of the 80's until the mid 90's. Developed by new wave the bands combined elements of indie-rock, punk, grunge and pop and became an important part of German youth culture and made a new self-conception in using German language in popular music.

At the end of the 1980s, a German-language music scene was created in Hamburg, whose bands had no record contracts and did not release it anything. Only with the founding of the label L'age d'or in October 1988 this kind of music got a platform. One of the first acts that were signed was Huah! Formed by Frank Möller they made their very own thing between punk, hip-hop and soul. Sadly they never got the critical acclaim they should have.

Another band from Hamburg that never made great success was Kolossale Jugend. Named after Young Marble Giant's epic album Colossal Youth. This was guitar based indie rock, as it was so intense and reluctant at that time only American or British groups got it.

Another label that released bands from this genre was Alfred Hilsberg's What's So Funny About. Blumfeld's first albums were released on this label. Blumfeld are probably the ones that got success in these days. Their sound, originally strongly influenced by guitar feedback, turned into a more pop-oriented sound after the band was reshaped in the mid-1990s. The most important feature is the interleaved German lyrics, partly performed in voice vocals by the singer Jochen Distelmeyer, which combine their own emotional worlds with social criticism in pictorial language.