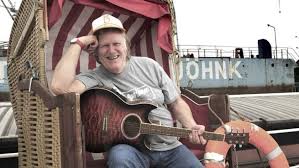 When I got home from work I got the news that Gunter Gabriel died yesterday. He was a composer, producer and singer-songwriter from the late 70's until now. His work wasn't recognized during the last decades. He built an image as people's voice in the late 70's/early 80's. He made a million of Euros and wasted it as fast as he got it. Living the live of Rock and Roll he was present from my youngest days. The finest thing he did was that he introduced me to country music when it was unusual listening to it. I always liked his somber voice and the stories he told me. 14 years ago he fulfiled himself a dream and went to Nashville to make a record with Johnny Cash's songs performed in German. He translated his songs suitable into German. Sadly I got no record from him because he was always present to my life with all his ups and downs. He was one of this artists from Germany that built my musical taste in a very small corner.