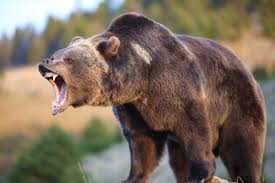 Of course not a word about the big North American brown bear. More about a New York based band that is on duty since 15 years. Now they announce a new record Painted Ruins for mid of August. I have to admit that I lost them out of my focus a few years ago and the more I was gladly surprised that the band didn't changed their sound with this new songs. They still play their perfect arranged psychedelic folk with great harmonies in singing. The song „Three of ring“ begins well dull, with dickey rumbling Drum-Machine with synthetic bass, electronically, almost quite dirtily, discoid. One only still waits for Thom Yorke. How ever, it changes. A guitar pulls affectionate spirals. There come choirs for several voices, like by blue fog, over there from the other hill, they penetrate to our ear. There is a long instrumental held passage in the middle section. Raindrops, splashing, to breaths, bubbling, longing.


Their second release from the new album is quiet different. Moving more to electronic sounds but never lose their trademarks: elegance and ghostly harmonies. Something between folk-disco and Krautpop.

The new Grizzly Bear music is really a treat! There is real ambition in the music!