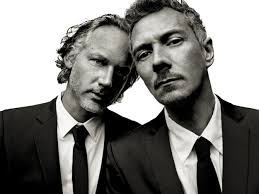 Kruder & Dorfmeister got famous as producers and DJ's in the late 90's. Their album DJ-Kicks were on heavy rotation in many pubs and coffee-shops at this time. The Vienna duo made their trip-hop sound compatible for many people and I have to admit that this record is still on rotation at my place since then. The more I was surprised that they are going to release a new album at the end of October. But it isn't really a new album. It is more the release of an forgotten album. It was made in 1995, three years before the release of DJ-Kicks. The album was produced and neatly archived as a DAT tape and now rediscovered on stage during a move. Restored and released on today's technical standard the song shows downtempo and trip-hop at it's peak. A beautiful release that makes me looking forward to the new album.

Just fixed that for you:

"Their album DJ-Kicks was on heavy rotation in many pubs & coffee-shops at this time. And Medd Towers."