Six Strings That Changed The World 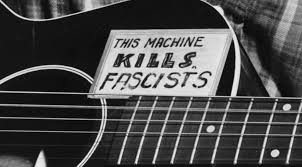 A few days ago I saw a documentary about how the guitar affected music and history. Starting in the 20's of the last century when Woody Guthrie sung for the refugees in California with the machine that kills fascists over the folk scene in the 60's when Dylan first played electrical to Jimi Hendrix showed us the influence guitar had. And it ended in several revivals during the last decades when bands made music based on massive guitars. I take this to an occasion to feature some tracks from my younger days when the musical taste of many was focused on guitar slingers.