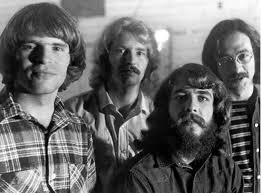 One of the most covered songs in history is Norman Whitfield/Barret Strong's I heard it through the grapevine. First released by Smokey Robinson and the Miracles in 1966 many artists covered this song more or less successful. In 1970 Creedence Clearwater Revival released a version on their album Cosmo's Factory. This album was a million seller almost 50 years ago and it also was played often when I was much younger. I really liked the way they played their unique kind of a swampy blues-rock and it is always a pleasure coming back to the music of my later childhood.

Creedence Clearwater Revival - I heard it through the grapevine
Eingestellt von Walter um 05:41

A terrific cover. Now that I come to think about it, Side 2 of 'Cosmo's Factory' is pretty much impeccable.