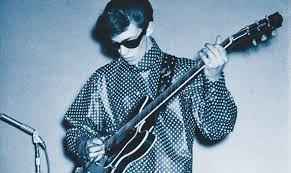 It was back in the mid 70's of the last century when rock music got boring. Torn between mainstream rock and the verve of pub rock a band appeared on the scene that was different to all. Be-Bop Deluxe made the difference these days. They was categorized as art-rock but they were more. Their guitarist Bill Nelson, one of the most underrated guitar players in these days, created a sound that was totally different to all other bands. It is somewhere between art rock, guitar slinging added with the best of improvisation we all knew from bands of the krautrock era. It was never a music for everyone but I enjoyed listening to Nelson and his guitar during the last decades (and as I read John Peel played him often in his shows). He recorded almost 100 records during the last years and I lost him somewhere during the last years and found back to him when he released his latest record The Awakening Of Dr Dream an album full of instrumentals showing his abilities of playing guitar.