Dawning Of A New Era 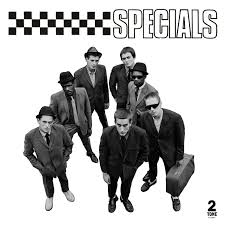 A few days ago I listened to a radio show featuring famous albums from the last decades. It is a series during the summer and it started with the epoch-making first album by The Specials. Back in 1979 is I had to do my basic military service in German army. Not much money to spent and living mostly together with other guys that have to share the same commitment. But we had a social room in the attic where could meet, drink, talk and listen to music to. In this time ska was the very new thing that was hyped by musical press and I suddenly got infected by this kind of music. Of course I knew a lot of songs from Jamaica and reggae was heard all over but I didn't knew anything about the ska movement in the 60's or what it meant to pop culture in Great Britain. For me it was only a new sound I could agree much to. In these days I owned the albums of The Specials. Madness and other Two Tone bands and I felt save and harm to this sound. The self titled album is still a classic and Wiki tells us this about it:

Musically, the album encapsulates the wave of British ska, greatly reworking the original sound of 1960s Jamaican ska. The music shares the infectious energy and humour of the original sound, but injects new-found anger and punk sensibility. The resulting sound is considerably less laid-back and "Caribbean" sounding than original ska, and dispensed with much of the percussion and the larger horn sections used in the older variety. The Specials also brought guitar to the front of the mix; it had often been a secondary instrument in Jamaican ska

The album produced by Elvis Costello with his anti-racist basic position which hits on rage about unemployment, social injustice, however, also on humor and opposition is still an all time favourite of mine during the last decades. Not only that The Specials brought their own songs to us they also introduced a lot of folks to classic songs by Toots and the Maytals, Prince Buster or Dandy Livingstone. It feels good to remember great records after all these years.