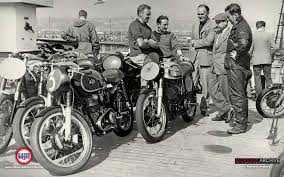 A band named after a song by Robert Forster can't be bad was my first thought when I first noticed The Surfing Magazines and I started further investigations. The band contains a half of Slow Club and two third of The Wave Pictures and they play guitar music influenced by Americana, Surf Rock and Velvet Underground. Not the hottest new thing but garage- and surf-rock how it should be.

Thanks for this Walter, I wasn't a ware of this project. Another one to add to my ever growing list.

Drew must be salivating. Surfing Magazines is such a great song. This band has much to live up to using that moniker. Looking forward to giving these a listen as I got swept up in the Slow Club fever so many of us bloggers caught a couple of years ago when Drew flaunted them.