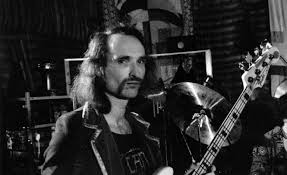 Yesterday the news arrived that one more Krautrock-legend passed away. A few months ago we heard that Jaki Liebezeit, probably one of the best drummers of all time passed away and now Holger Czukay passed away as well. As far as we know yet he was found in the rooms of studio after a few days when he died. It is not necessary to talk much about him and his influences to artists like John Lydon, Jah Wobble, David Sylvain, Mark Hollis and even The Edge. He called himself the universal dilettante because he was never trained to master an instrument perfectly although he could played a lot of instruments proper. He was one of those who discovered the possibilities of samplings, adding loops together and always searching for new electronic sounds.

If you have the nerve and time you can listen to a live concert from 1970 in Soest, Germany with the first appearance of Can's singer Damo Suzuki.

A fantastic tribute Walter. I'm looking forward to checking out the 1970 concert later.