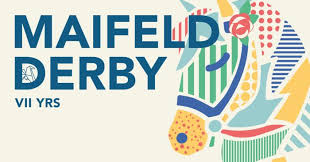 Looking back to the first day of the festival I listened to a lot of new electronic music and you might think it is a space for computer based DJ-music. But there were lots of bands playing in a smaller venue that made real handmade guitar based music. Sadly I couldn't watch them all because I wanted to see the main acts today. I know I missed a lot of new bands but it was hard to make to right decision. So we started into the day with a band I featured a few month ago. Klez.E. is a band formed in Eastern Germany a few years ago and they were announced as the German Cure. And indeed, they had a lot of influence of them. Playing a bass inspired music with a charismatic singer in front and added with some post-punk guitar licks they made big fun watching them.


The next band that is worth to be named at this place is Zeal & Ardor. Listening to their songs you might think that they should be based in Southern USA but they are from Basel, Switzerland. They make a very unique mixture of gospel influenced sacred pop with and mix it with the best of black metal. For me it was the first time I listened to a sound like this and I have say that it impressed me the way they did their forward driven sound. Heavy guitars galore and an appearance that I won't forget.


After this I listened to Royal Canoe and Temples, both bands working on a new guitar pop and art-rock. Both bands were not too bad but when I can't remember any song a few weeks later I think it is not worth to write about them. Respecting their work I think I go further to the next one. American Football is an American independent band formed 20 years ago in Illinois. They made a few records and vanished after a few years in the scene. Now they made a reunion with a timeless unique independent sound. Their sound could be described as high-school soft emo-core. I didn't know them before and don't know their output from years gone by but their relaxed guitar inspired sound was perfect for a warm Saturday afternoon. They persuaded me at this time and I think I will listen to them during the next months for more than one time.


After watching Metronomy, another electronic band supporting some main acts during the last years I had to decide between Kate Tempest and Ryley Walker. It was hard because I really like Kate Tempest and her last album and I am a fan of Ryley. I decided for Kate Tempest first to watch out what will happen. She was in a good mood to wake up the audience with her lyrics and a band that fit to their songs very well. But after 15 minutes it was too stressful to listen to her and so I moved to Ryley Walker in the smallest venue. And this choice was perfect. He once made a great appearance. Playing his blues inspired songs with great soli on his guitar. It is always a pleasure to listen to him. He is probably one of this artists I would go to a concert and leave without being disappointed.

We finished the evening watching Moderat, an electronic music group originating in Berlin, Germany. They are famous at this scene and I was very excited to see them live. It is always difficult to perform electronic sound live on stage. But these guys impressed me very much. Their combination of drifty beats, reggae inspired vocals and the balance of pure electric music and krauty improvisations made a perfect finish of the second day.

Zeal & Ardor sound fascinating. Have you heard of Myrkur? She's a Danish artist who made her name as half of an indie duo, but also now records as Myrkur making a blend of ethereal Norwegian folk and black metal. Her album 'M' is well worth a listen.