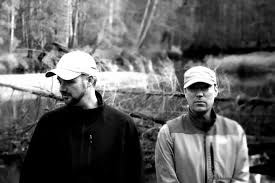 ... with a new band that came on my radar a few weeks ago when a promo mail arrived in my in-box. It is not often that I listen to the whole record but I did by Loess, a Philadephia based project by Clay Emerson an Ian Pullman. Their songs are based on ambient percussive elements. On this groundwork they foster a feeling of building and collapsing. Those slow, crunchy and drifting sound escapes based on synthesizer sounds may be out of time but timeless in the way Loess do.

Good stuff Walter. Thanks for this