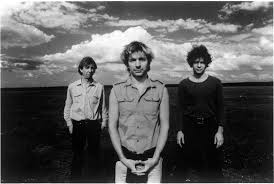 It seems like these days a lot of anniversary edits from albums that was released ages before are released. So I heard that there is a new release of L'eau Rouge/Red Water by The Young Gods is available now. The Young Gods are a Swiss industrial rock band from Fribourg and they had their big times in the late 80's. I can't explain why but a lot of people could agree with their brilliantly arranged combination of guitar riff samples/loops and powerful drumming with snaky bass-lines. The roaring voice might not be everyones pleasure but it fits perfect to this raw sound. Another step back in history to music that was important for me in these days.