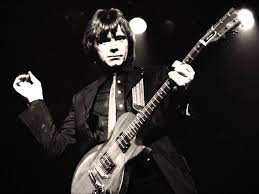 In the days punk and new wave changed my personal music taste completely two guys held up the flag of pub rock constantly. Dave Edmunds and Nick Lowe were the keeper of classic Rock 'n' Roll and during the second half of the 70's they released a few classic albums. I was always a fan of how Edmunds used to play his guitar. He wasn't the best guitar player in his time but he knows how to get a great sound out of his instrument. He was able to play the twangy sound as well as fast riffs. A few days ago I found his albums in my collection and thought by myself to take a trip back to the days I listened often to them. It was Tracks On Wax 4 from 1977 that still impresses me. Filled with covers of forgotten gems from the past and a song from his buddy Nick Lowe. Even if times and taste changed these songs are great and it made me happy to hear them once again.

In the afternoon I will go to support Stuttgart in their game against When Wiesbaden. We are at the top of the table (were we belong) and they are a promoted team and it should be a safe win but I didn't saw my team playing constantly well during 90 minutes. But anyway, it will be fun to see some friends again watching this game.

A great LP Walter, as was his next one 'Repeat When Necessary'.